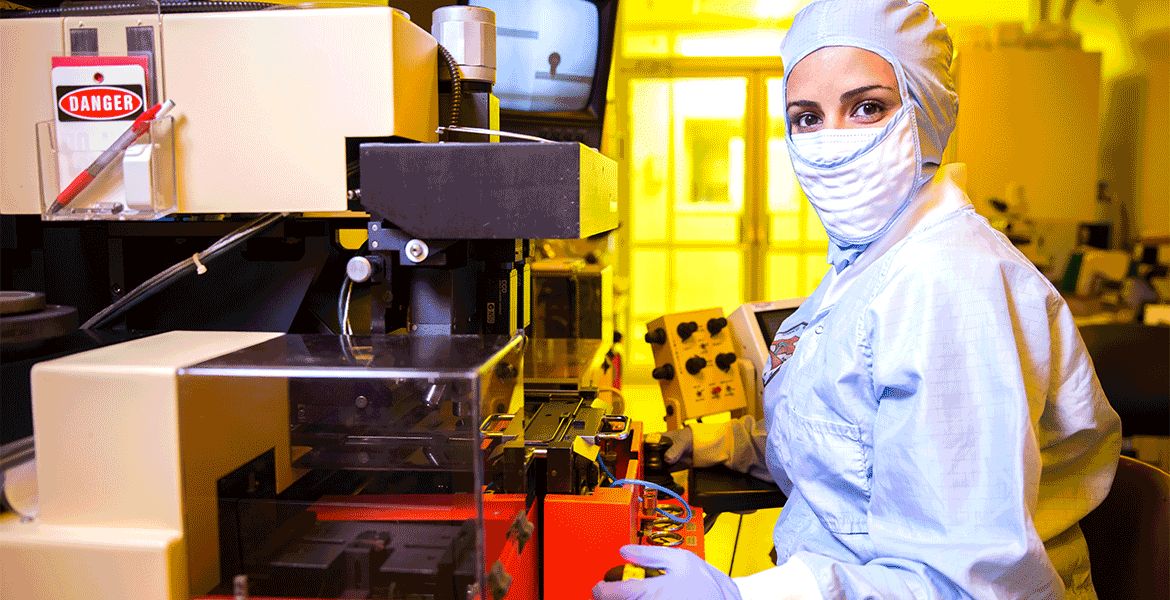 Mahsa Lotfi-Marchoubeh pulls shoe covers onto her feet, one at a time. She puts on a face mask, followed by a bouffant cap. She gently pulls a hood over her head. No part of her head or neck is exposed, except for her eyes.

She steps into a jumpsuit, tucks the head into the collar and zips the suit up to her chin. She pulls booties over her feet, ensuring each leg of the jumpsuit is securely tucked inside. She pulls gloves onto her hands and slides safety goggles over her eyes.

Now fully outfitted in her cleanroom suit, she's ready to enter her research lab and get to work.

A doctoral student in chemistry, Lotfi-Marchoubeh is developing a probe to measure chemicals in the brain. Developing the probe takes careful consideration and incredible attention to detail. The probe must be small enough to enter delicate brain tissue. However, it also must have the complexity to perform chemical measurements.

"The size is the main consideration to avoid tissue damage," Lotfi-Marchoubeh said.

The probe must be less than 100 micrometers thick. That’s the thickness of one strand of hair. The probe also must be the right length, so it can reach the targeted parts of the brain.

Once the prototype is completed, Lotfi-Marchoubeh will travel to the University of Pittsburg to work with collaborators to test the probe. In addition to making chemical measurements, the probe will be tested for its strength upon insertion, the amount of tissue damage caused and the body's reaction to the foreign object.

The probe features nine gold electrodes. The electrodes make the chemical measurements. The probe is attached to an instrument that reads electrical currents, allowing researchers to detect the chemical being measured.

Dopamine, noradrenaline and adrenaline are believed to be tied to depression and neurocognitive disorders. Better understanding these chemicals and how they interact in the brain could lead researchers to greater discoveries in treating these conditions.

"The most rewarding part of my research is that it might one day be used to understand depression, Parkinson's disease and other neurocognitive diseases," Lotfi-Marchoubeh said. "The fact that we'll be one step closer to understanding the brain is amazing. When I think of the brain, I think of the cosmos — that's how complicated it sounds to me. It's a little four-pound organ, but it's incredibly complicated."

Lotfi-Marchoubeh is on track to complete her doctorate in the upcoming academic year. After graduation, she plans to stay in academia. She has a passion for encouraging students to uncover their unknown scientific interests.

"I have a heart for teaching and helping people understand what I'm passionate about," she said. "I want to motivate younger students to find what they are passionate about and pursue those interests."

Lotfi-Marchoubeh holds a bachelor's degree in chemistry and a master's degree in analytical chemistry from Isfahan University of Technology in her native country of Iran. She is advised by Ingrid Fritsch.